A Passed over Donnybrook game that I have just come across!Oops!

This is another game from September before I had taken possession of an iPad to make life easier and also before Nicola had shut down life again.
Wednesday 16th September.

First game since lockdown saw me heading out to North Berwick for a social distanced venture into Donnybrook with a game put together by Dave O’Brien consisting of a raid by some North African bad guys on the Spanish Costas. 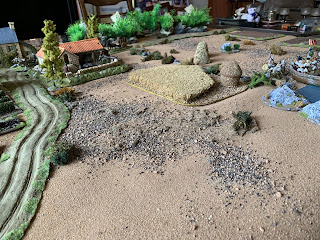 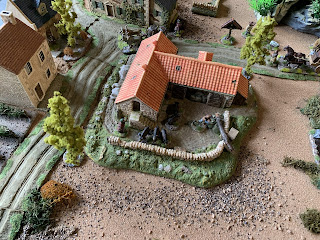 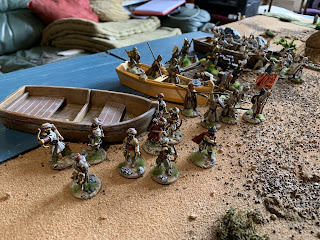 I had bought some 17th century Spanish from Black Angus last year so this was their first outing and true to form being new started the day with a kicking. 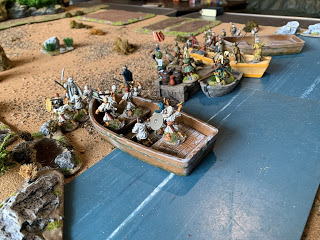 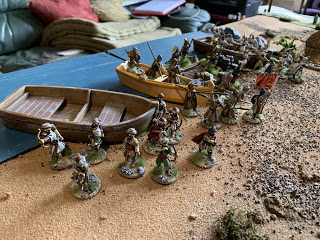 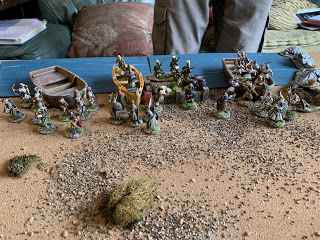 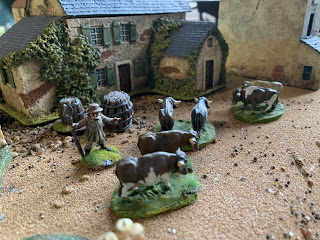 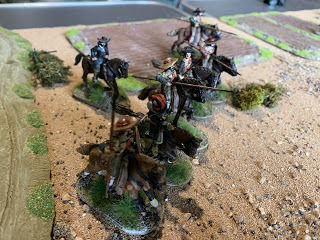 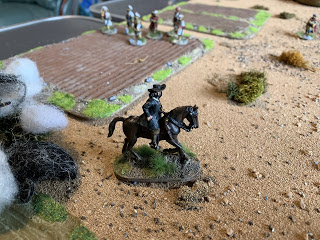 The scenario was for the bad guys to land and pillage a Spanish holiday resort and abscond with some booty consisting of beasts and hardware.As this was a raid my senors came onto the table as reinforcements whereas Dave’s guys had carte blanche for the first two turns as only my first squad of militia were allowed to turn up. 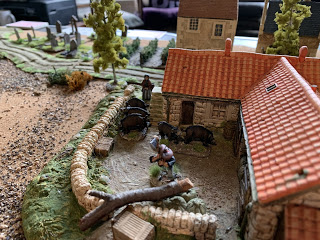 Dave’s force consisted of a horde of screaming heathens armed with amongst other things spears and bows which initially done the dastardly deed on my militia.To add insult to injury his super dooper Janissaries opened up with their muskets decimating my militia as well as a few shots at my newly arrived picadors.Obviously his plan was to hold the Spanish at bay giving his other miscreants time to pillage the village for all the livestock and anything else that wasn’t nailed down. 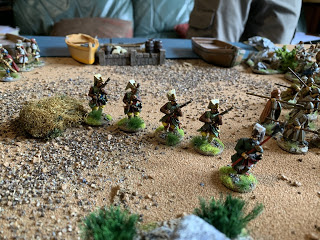 I thought that this was going to be an early bath as my forces were dwindling at a fair rate of knots and it was only when his spearman entered the village  that I started to get some payback  and started to successfully shoot back with some telling hits first on Dave's spearmen with my newly arriving infantry engaging the archers.By this time my cavalry had dwindled down to the officer who duly charged Dave's weapon master hoping to do away with this miscreant.Well that was the plan but even though my cavalry officer charged in horse to the fore ,he came off second best after a few turns of fisticuffs.

My general arrived on and proceeded to encourage his men to greater things and the Spanish shooting began to take its toll on the marauding raiders slowly but surely.My regulars arrived and proceeded to do away with the annoying archers giving them an opportunity to try and head off the looters before they reached the safety of their boats.Meanwhile my general was having a field day encouraging his men to better thing and also doing away with first the commanding general of the pirates and then the invading Iman.the only problem here was that his own force were once again dwindling.They dwindled that much that although the Spanish leader done well mano a mano he couldn't stop the last of the militia headong for the Spanish hill complete with their general.

Dave had slowly but surely dragged and herded all his ill gotten gains back to the boats.What amazed me was that he even stole some pigs which I would imagine would not go down too well in North Africa.The down side to Dave's marginal victory was that he had hardly anybody left to enjoy the fruits of his escapade but at least the remaining rabble would have a good barbeque.

A great game and one that was greatly welcomed as like the rest of us gamers we have had a very barren 2020 games wise and hopefully it will continue even although a second lockdown could be on the horizon due to the idiotic minority.

Heading out to the Garvald Film Studios on Monday for a foray into a socially distanced  In Her Majesty's Name outing.

All scenery,scenario and Arab figures were provided by Dave himself with interruptions provided by the lovely Lola the dalmation.