Wednesday 7th June.
The Garvald film studios reopened tonight again after the second Nicola lockdown and hopefully this will be the first of many game nights to come.Our first game was a venture into the unknown literally as it was the first attempt at Stargrave which on first reflections looks to be a good skirmish game. We both purchased the rulebook courtesy of the kickstarter to which I also purchased the figures to accompany it. I didn’t have any of them painted so I had to improvise and utilise some Necromunda figures I had acquired a few years ago tfrom oor Shug’s legacy.Colin had utilised some Kryomek figures that he had come across and yes they were all

When I arrived I found that a table had been  set up with scenery and plenty of scatter material for our two gangs to squabble over.The figures were placed on the table and the game commenced with as per usual both gangs running to make best use of the cover provided.As this was our first proper game the rule book was perused on many an occasion as the game mechanics were worked through.

The game consists of two crews scouring the board for booty coming in the form of solid crates or data transfers which had been placed round the board and the more your side procured the merrier.So after initiative was diced for ,which I won,the usual heading for the nearest treasure troves was the order of the day for the Watson gang. Colin’s crew were out to stop me but didn’t start too well as one of his girls went down in a blaze of glory.One down nine to go.The first couple of turns produced the usual early sparring rounds as we both sniped at each other with not a lot of damage done.

Colin’s crew were the first to reach the crates and under fire from my lads they started opening the crates and downloading the data.It looked like it was going to be a short game until my shots started to count and the hits were piling up on the other crew and that was before my flamethrower opened up.Colin’s girls replied with very accurate grenade fire causing my first mate and a minion to utter a few grunts.

The object of the game is to acquire the crates and head for home so Colin’s femme fatales had already reached their first crates and were opening them up in order to transport them to safety.My lads kept up their unwavering fire and eventually done away with Colin’s first mate leaving it’s partner on her own to haul the booty to their side of the board.One of Colin’s girls made contact with a data base and was heading off with it when I used my first ever power which was to make said girl drop the package and move it away from her.This came at some cost to my captain as he soon attracted some deadly fire from various enemy gang members including their leader who had moved into a better firing position but she also put herself into range of one of my lads who was throwing grenades at her like sweeties eventually doing away with her. 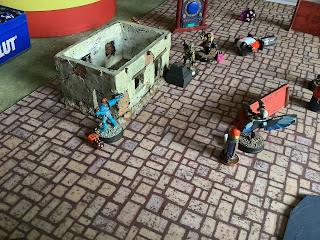 One of my lads came into contact with another data base and lo and behold he opened it first time but that was the easy bit.No sooner had he picked it up when he was shot in the back making him fall and drop his ill gotten gains.This was soon avenged by my shooting everything in sight and eventually making Colin’s gang diminish by the minute and giving me a very slight victory.

As I said earlier this was a first run for myself with this game and now I shall sit down and read the rules again and plan for future adventures and also how to best run a gang.We are hoping that if Partizan goes ahead this year to take the game with us as it’ll be easily transportable by train but I’m not holding my breath about the show going ahead as I think people in general will still be a bit wary of public events but you never know.
Posted by Tim Watson at 23:08