Today was the first game show on my 2017 calender so off I trotted(or drove) out to Straiton to meet up with Colin Jack first picking up Mr Ray and Bill Miller along the way and after a quick trip into Macdonald's for a not so healthy brekkie we all climbed into Colin's mean machine and headed for the not so sunnier climes of Dumfries.We've driven the road to Dumfries many a time passing through Moffat on the way and still Mr Ray hasn't seen the Devil's Beeftub which is a valley north of Moffat where Reiver's used to hide their ill gotten rustler gains as it was a tad misty.
We arrived into Dumfries and headed for the Cairndale Hotel where the gameshow was held and set up our show table in record time giving us some time to peruse the rest of the show,stopping off for coffee and a bacon roll on the way.
Our game today was based on the Boshin Wars which were fought in Japan between the Tokugawa clan which was the clan of the ruling shogun at the time and followers of three other clans who wanted power to return to the emperor but more than likely wanted power for themselves which is the norm for politicians.Many battles were fought with the Imperial troops coming out on top mainly as they were armed with modern weapons.
We were using Osprey's Men who would be King rules and proceeded with our first game as the rules are meant for short games.Bill and Mr Ray started the proceedings supervised by myself and Colin but even with our supervision we still found ourselves scouring the rules.It is amazing how much you can forget after 10 days.Must be this over 60 lark. 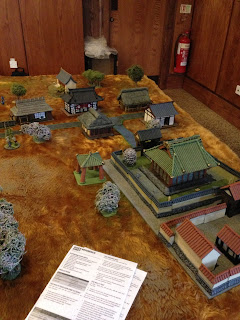 The game lasted for about an hour but even then we had realised that we had overlooked some of the rules and gameplay.
One of the fun things about this game is giving the leadership values and traits to each individual squad leader which range from Hero of the Empire right down to Hapless where the leader couldn't motivate his men for love nor money and these traits follow them right through the game.Some of the other traits include Shirker,Cad,Yellow Bellied and Bald as a coot.Not a very serious game.

After the first game we headed off to see what other games were on offer and what toys were there to buy.This would be the first of a few forages. 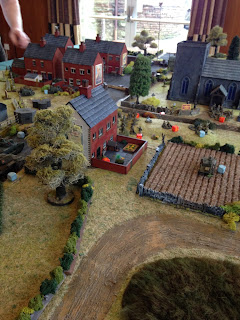 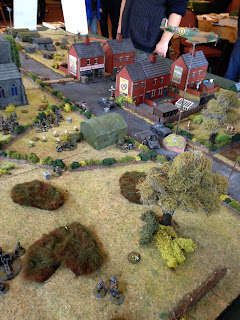 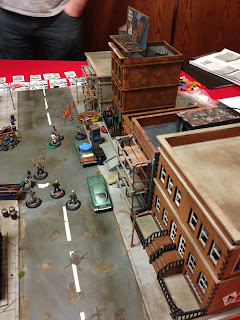 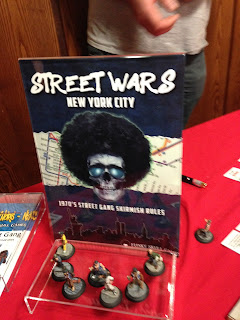 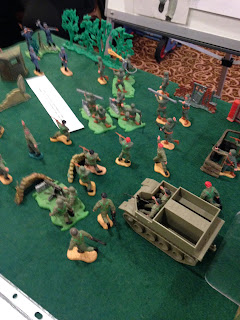 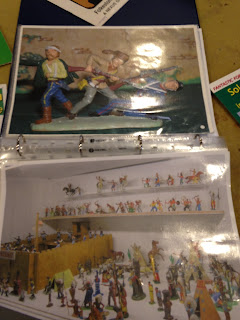